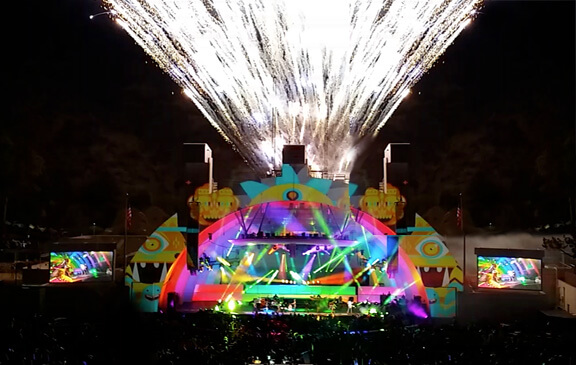 It was a picture-perfect evening at the historic Hollywood Bowl as an unbelievable lineup of talent took the stage for a more than 4-hour concert emceed by Los Angeles Amp Radio deejays. The event was sponsored by 5-hour ENERGY with a portion of the proceeds benefitting Living Beyond Breast Cancer and Young Survival Coalition. It is no wonder that the tickets sold out as soon as they went on sale as those performers who gave of their time and talent for the event, in order of appearance, were Sia, Paramore, Iggy Azalea with a special guest appearance from Jennifer Lopez, Lady Antebellum, Taylor Swift, Alicia Keys, Ariana Grande and Pharrell Williams with a special guest appearance by Gwen Stefani. See the recap of the event.

And as I walked away from the venue at the end of the evening, I felt a renewed spirit and view of the power of the individual that when we all work together as a team, we can do anything.

Every single performer did an incredible set that was definitely appreciated by the attendees as confirmed by the wave of glow sticks that continued unbroken throughout the evening. It was so incredible to be a part of the crowd that was fortunate enough to see all of these top acts in one venue. I can’t begin to tell you how much I enjoyed every single one. But, I must say that having Pharrell as the last performer in this lineup was the icing on the cake for me.

Pharrell tailored much of his set to the theme of the evening. In addition to his always incredible performance, he brought to the stage some very moving reminders about why we were there and the reason that this benefit was happening. In the words of this most unassuming man, we were informed that both of his grandmothers had died from cancer and that this was a continuing battle that everyone, working together, can and will win. He reminded everyone of the power of energy and that our combined output of a universal positive energy could overcome anything. He explained that in the history of mankind, we have always faced huge battles and wars and have always triumphed in the end and that the battle against cancer is no different.

As he continued with his repertoire of songs for the evening, as always, he shared the stage with acknowledgment and love for the backup dancers and his band. He expressed his gratitude for the opportunity to be doing what he loves in this place and time and how moved he was that everyone was so expressive of their appreciation with the rounds of applause and cheers that rang out constantly. And while he shared his vast collection of music with his adoring fans, he never allowed for the underlying message and mission of the evening to fade.

I am grateful for the ways in which he chose to honor all of those who have had to deal with breast cancer and the way in which he showed respect for all women. And while this is often a very sad subject to address, he managed to very subtly remind everyone that it is the women who are in charge and if you have any doubt, just stop and consider what would happen if all women got together and decided not to have any more children. I think his message was loud and clear with an underlying reminder of why we all need to help women everywhere as we unite in this cause.

Most fitting, as Pharrell was performing his final number – yes, it was “Happy”, the night sky was filled with fireworks that continued long after the last note had faded away. It was the perfect way to celebrate the efforts of every single person who had a hand in putting together this unique and heart-warming event. It was a celebration of an audience filled with grateful fans that included many, many young girls and teens for whom we are all working to end breast cancer so that they, as adults, will never personally know what so many women before them have had to overcome. And as I walked away from the venue at the end of the evening, I felt a renewed spirit and view of the power of the individual that when we all work together as a team, we can do anything.